Does our approach to teaching math fail even the smartest kids?

ADVERTISEMENT
Parenting » Education trends, Math » Does our approach to teaching math fail even the smartest kids?

Does our approach to teaching math fail even the smartest kids?

Here’s why the math education your children need is most likely not what their school is teaching. 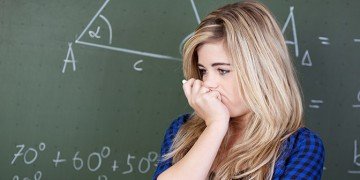 As sure as one plus one equals two, it happens year after year. Kids who have been bringing home A’s in chemistry and acing AP Calculus arrive at college with visions of STEM careers dancing in their heads. Then they hit an invisible, but very painful, wall.

According to research from the University of California, Los Angeles, as many as 60 percent of all college students who intend to study a STEM (science, technology, engineering, math) subject end up transferring out. In an era when politicians and educators are beside themselves with worry over American students’ lagging math and science scores compared to the whiz kids of Shanghai and Japan, this attrition trend so troubles experts it has spawned an entire field of research on “STEM drop-out,” citing reasons from gender and race to GPAs and peer relationships.

One theory for the STEM exodus is that American students aren’t getting a good foundation in math — a necessary skill in many scientific and technical curricula. After all, about a third of American high school seniors don’t score proficient in math. But here’s the kicker: STEM attrition rates are even higher at the most selective colleges — like the Ivy Leagues — places where kids need killer AP scores and grades just to get in.

So why do even the most accomplished students burn out of STEM programs when they hit college? One recent article in the New York Times explored possible reasons — from the alluring grade inflation in the arts and humanities, to what one engineering professor characterized as the boring, largely theoretical “math-science death march” of first-year requirements.

That may explain the phenomenon, at least in part. But math experts around the country point to another culprit. Richard Rusczyk, a former Math Olympiad winner and the founder of the online math program Art of Problem Solving,  is part of a group of math educators who sees the mystery of the disappearing STEM major from a different angle. It’s not that kids aren’t getting enough math, they say, but that we’re teaching K-12 math all wrong.

Rusczyk’s insight is based on a phenomenon he witnessed firsthand when he arrived at Princeton University and began studying math alongside kids who had attended the most prestigious high schools in the country. “These were kids who had never gotten anything but 95s and 100s on their tests and suddenly they were struggling and were getting 62s on tests and they decided they weren’t any good [at math],” he explains.

Next page: a math reality check

Call it the mathematical reality check. Suddenly, Rusczyk recalls, formerly accomplished students were faced with a new idea: that math required more than rote learning — it required creativity, grit, and strenuous mental gymnastics. “They had been taught that math was a set of destinations and they were taught to follow a set of rules to get to those places,” he recalls. “They were never taught how to read a map, or even that there is a map.”

Indeed, traditional math curriculum is to teach discrete algorithms, a set of rules that elicit a correct answer, like how to do long division, say, or how to use the Pythagorean theorem. Then students “learn” the material by doing a large quantity of similar problems. The result, says Rusczyk, is that students are rarely asked to solve a problem they are not thoroughly familiar with. Instead, they come to think of math as a series of rules to be memorized. The trouble is kids don’t necessarily learn how to attack a new or different kind of equation.

Rusczyk watched many of his fellow students, long accustomed to being “quick studies,” as they soured on math after experiencing what they perceived as failure. They quit — transferring their hopes and dreams to a less numerically challenging field like sociology or graphic design.

Rusczyk, in contrast, felt far more prepared when faced with a problem he didn’t know how to solve. Despite having attended what he characterizes as an average public school without a lot of advanced math classes, he had participated in math clubs and contests. In math clubs, he’d become accustomed to facing harder, multifaceted problems where the right approach wasn’t immediately apparent.

Instead of just learning how to follow rules, he explains, “In math competitions, I learned how to solve problems that I hadn’t seen before.” Instead of math becoming something he accomplished in return for a perfect score, he came to see math as problem solving — an exciting pleasure that was a distant relation to the rote drudgery of memorizing algorithms.

When Rusczyk looked around him, he noticed a pattern. His classmates who had experienced this kind of difficult problem solving — usually in after-school math clubs — could survive the transition to college math. The ones who had only been exposed to traditional math curriculum, the ones who, as Rusczyk puts it, have experienced the “tyranny of 100%” — gave up too easily because they thought if they weren’t getting top scores, they weren’t meant to do math. “Suddenly, a solid B was a 40%, the top grade [was] an 82%, the next 68%, and no one is getting a 100%,” he recalls. “But they didn’t know this.” Rusczyk realized that these kids had been dealt a bad hand: “They were taught [math] is a set of facts, not a process.”

These fundamental ideas — that math isn’t about following rules but about solving problems, that math means fun mental struggle, not boring rote learning — forms the basis of his online math school and curriculum, which currently includes pre-algebra though calculus and one year (third grade) of his new elementary school program, Beast Academy. Unlike traditional math curriculum, The Art of Problem Solving books first give kids problems (not the explanation for how to solve them) and leading questions to get them to struggle with the ideas a little before they are given the foolproof algorithm.

His programs are designed for gifted math students, but he claims his ideas could help all kids, gifted or not. His observations offer a solution for parents who want to help their children keep those STEM doors of opportunity open. To this end, he has a clear message to parents assessing their child’s math experience. What should kids be learning about math? For younger children, it’s important to give them a love for math — just as we try to give kids a love for reading.

“Kids smell fear,” he says. “And many elementary school teachers love reading but not math.” Once kids get older, don’t be afraid to push your child in a program that challenges him. “It’s supposed to be hard — if you’re getting 98% in a class… it may be too easy.”

He also recommends that parents look outside the classroom to provide the best place to challenge kids. “Math competitions, summer programs, math circles (programs which offer challenging math in non-judgmental environments) — whatever you can find that will give your kids a taste of why math can be fun.”

Finally, and most importantly, Rusczyk wants parents to give kids more time to explore their passions. “It’s terrible. Kids are so overscheduled — there’s AP this AP that — they’re doing all this garbage that doesn’t serve them in the long run.”

Rusczyk cautions that kids who love math and science often end up filling up their time with AP classes that aren’t central to their aspirations but more focused on GPA calculations (like AP Art History), and shortchange themselves when it comes to exploring math and science learning outside the classroom.

In the end, the skills required to solve a complex problem — to break the problem down into smaller parts, to approach it from different angles using different methods, to not getting intimidated or frustrated when the path isn’t obvious — are practical in any field of endeavor — from astrophysics to er, parenting. Ideally, math prepares kids to be better thinkers no matter where they land. For now, parents can use these skills to fill in their children’s math deficiencies, one problem at a time. The most glorious window in the world would not do him justice. But that does not stop me from trying.