This map shows the approximate location of the ice-free corridor and specific Paleoindian sites (Clovis theory).

It is not definitively known how or when Native Americans first settled the Americas and the present-day United States. The prevailing theory proposes that people from Eurasia followed game across Beringia, a land bridge that connected Siberia to present-day Alaska during the Ice Age, and then spread southward throughout the Americas. This migration may have begun as early as 30,000 years ago[3] and continued through to about 10,000 years ago, when the land bridge became submerged by the rising sea level caused by the melting glaciers.[4][full citation needed] These early inhabitants, called Paleo-Indians, soon diversified into hundreds of culturally distinct nations and tribes.

This pre-Columbian era incorporates all periods in the history of the Americas before the appearance of European influences on the American continents, spanning from the original settlement in the Upper Paleolithic period to European colonization during the early modern period. While the term technically refers to the era before Christopher Columbus' voyage in 1492, in practice the term usually includes the history of American indigenous cultures until they were conquered or significantly influenced by Europeans, even if this happened decades or centuries after Columbus's initial landing. 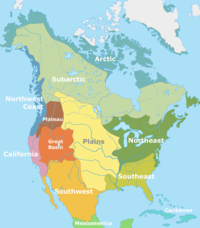 The Cultural areas of pre-Columbian North America, according to Alfred Kroeber.

By 10,000 BCE, humans were relatively well-established throughout North America. Originally, Paleo-Indian hunted Ice Age megafauna like mammoths, but as they began to go extinct, people turned instead to bison as a food source. As time went on, foraging for berries and seeds became an important alternative to hunting. Paleo-Indians in central Mexico were the first in the Americas to farm, starting to plant corn, beans, and squash around 8,000 BCE. Eventually, the knowledge began to spread northward. By 3,000 BCE, corn was being grown in the valleys of Arizona and New Mexico, followed by primitive irrigation systems and early villages of the Hohokam.[5][6]

One of the earlier cultures in the present-day United States was the Clovis culture, who are primarily identified by the use of fluted spear points called the Clovis point. From 9,100 to 8,850 BCE, the culture ranged over much of North America and also appeared in South America. Artifacts from this culture were first excavated in 1932 near Clovis, New Mexico. The Folsom culture was similar, but is marked by the use of the Folsom point.

A later migration identified by linguists, anthropologists, and archeologists occurred around 8,000 BCE. This included Na-Dene-speaking peoples, who reached the Pacific Northwest by 5,000 BCE.[7] From there, they migrated along the Pacific Coast and into the interior and constructed large multi-family dwellings in their villages, which were used only seasonally in the summer to hunt and fish, and in the winter to gather food supplies.[8] Another group, the Oshara Tradition people, who lived from 5,500 BCE to 600 CE, were part of the Archaic Southwest.

Grave Creek Mound, located in Moundsville, West Virginia, is one of the largest conical mounds in the United States. It was built by the Adena culture. 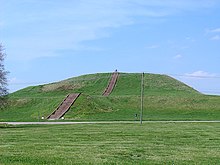 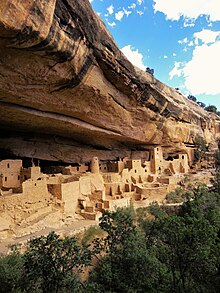 The Adena began constructing large earthwork mounds around 600 BCE. They are the earliest known people to have been Mound Builders, however, there are mounds in the United States that predate this culture. Watson Brake is an 11-mound complex in Louisiana that dates to 3,500 BCE, and nearby Poverty Point, built by the Poverty Point culture, is an earthwork complex that dates to 1,700 BCE. These mounds likely served a religious purpose.

The Adenans were absorbed into the Hopewell tradition, a powerful people who traded tools and goods across a wide territory. They continued the Adena tradition of mound-building, with remnants of several thousand still in existence across the core of their former territory in southern Ohio. The Hopewell pioneered a trading system called the Hopewell Exchange System, which at its greatest extent ran from the present-day Southeast up to the Canadian side of Lake Ontario.[9] By 500 CE, the Hopewellians had too disappeared, absorbed into the larger Mississippian culture.

The Mississippians were a broad group of tribes. Their most important city was Cahokia, near modern-day St. Louis, Missouri. At its peak in the 12th century, the city had an estimated population of 20,000, larger than the population of London at the time. The entire city was centered around a mound that stood 100 feet (30 m) tall. Cahokia, like many other cities and villages of the time, depended on hunting, foraging, trading, and agriculture, and developed a class system with slaves and human sacrifice that was influenced by societies to the south, like the Mayans.[5]

In the Southwest, the Anasazi began constructing stone and adobe pueblos around 900 BCE.[10] These apartment-like structures were often built into cliff faces, as seen in the Cliff Palace at Mesa Verde. Some grew to be the size of cities, with Pueblo Bonito along the Chaco River in New Mexico once consisting of 800 rooms.[5] 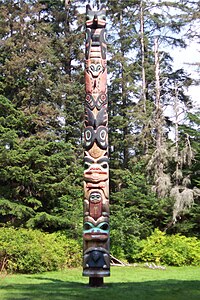 The K'alyaan Totem Pole of the Tlingit Kiks.ádi Clan, erected at Sitka National Historical Park to commemorate the lives lost in the 1804 Battle of Sitka.

The indigenous peoples of the Pacific Northwest were likely the most affluent Native Americans. Many distinct cultural and political nations developed there, but they all shared certain beliefs traditions, and practices, such as the centrality of salmon as a resource and spiritual symbol. Permanent villages began to develop in this region as early as 1,000 BCE, and these communities celebrated by the gift-giving feast of the potlatch. These gatherings were usually organized to commemorate special events such as the raising of a Totem pole or the celebration of a new chief.

In present-day upstate New York, the Iroquois formed a confederacy of tribal nations in the mid-15th century, consisting of the Oneida, Mohawk, Onondaga, Cayuga, and Seneca. Their system of affiliation was a kind of federation, different from the strong, centralized European monarchies.[11][12][13] Each tribe had seats in a group of 50 sachem chiefs. It has been suggested that their culture contributed to political thinking during the development of the United States government. The Iroquois were powerful, waging war with many neighboring tribes, and later, Europeans. As their territory expanded, smaller tribes were forced further west, including the Osage, Kaw, Ponca, and Omaha peoples.[13][14]

Polynesians began to settle in the Hawaiian Islands between the 1st and 10th centuries. Around 1200 CE, Tahitian explorers found and began settling the area as well. This marked the rise of the Hawaiian civilization, which would be largely separated from the rest of the world until the arrival of the British 600 years later. Europeans under the British explorer James Cook arrived in the Hawaiian Islands in 1778, and within five years of contact, European military technology would help Kamehameha I conquer most of the people, and eventually unify the islands for the first time; establishing the Hawaiian Kingdom.